It could be said that baklava is the treasure of the Mediterranean. After all, multiple countries and regions have been trying for centuries to take credit for this delicious dessert. However, over time as the bickering continued, baklava earned its name as a delicacy that united Mediterranean countries and is still associated with them today. A staple of the food and culture. 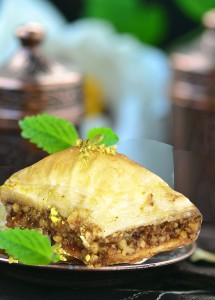 As time went on, the myth of this luxurious dessert reached the Middle East, becoming a familiar pastry in locations like Armenia and Turkey. Ever since this tasty treat was invented(regardless of who deserves the credit) it has been associated with rich Mediterranean flavors and the luxury. In fact, baklava used to only be made for special occasions and was once was considered to be something that only the wealthiest of people were able to afford. Luckily, over time baklava has transformed into an affordable and enticing dessert that everyone can enjoy.

At Jerusalem Restaurant in Denver, our baklava recipe is sacred and the result it renders is somewhat of a celebrity. With flaky layers of decadent phyllo dough encasing a mouth watering filling of walnuts, cinnamon, honey, and brown sugar and topped with sweet rose water syrup and crushed pistachios…what more could your sweet tooth ask for?

This dessert is the perfect ending to a nice relaxing Mediterranean dinner or even as a midday treat to yourself when you’re craving something sweet and savory.

Stop by our location on E. Evans Avenue in Denver and let us provide you with the most incredible baklava you have ever eaten!

Jerusalem Restaurant is acclaimed for their authentic Mediterranean/Middle Eastern cuisine, warm hospitality and lively ambiance. The family owned restaurant has been serving the Denver metro area for over 35 years.

Our robust flavors of the Middle Eastern region are sure to tantalize your taste buds. As top Middle Eastern restaurant in Colorado, Jerusalem’s menu provides the freshest, healthiest, and tastiest food.

Read some recent articles and blogs posted about Jerusalem Restaurant. Learn why your friends and neighbors have rated us as one of the top Middle Eastern Restaurants in Colorado!

Don't Take Our Word For It, Our Satisfied Clients Say It All

Check out these testimonials and more from our happy customers below!